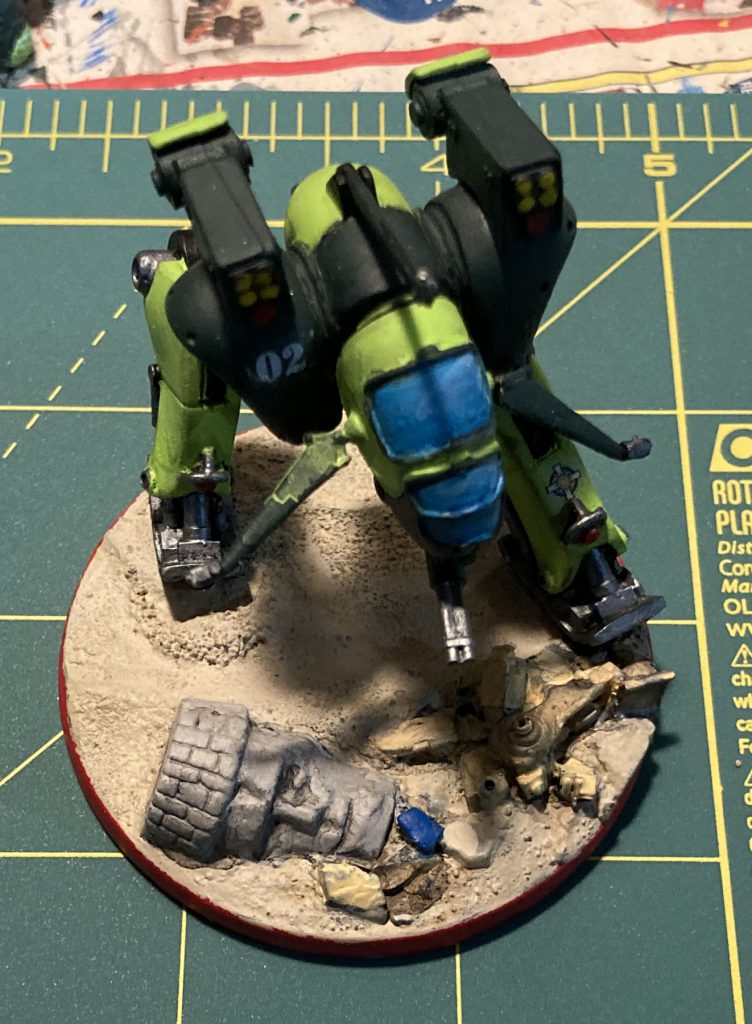 One of my current “To-do” projects is a Command Naga for DP9’s Heavy Gear. (Disclaimer: I’ve done work for the Pod). I finally finished a ‘standard’ Naga for my small Eastern Suns Emirate forces and decided a Command Naga would be a fun piece.

To make it even more fun, I wanted to use the SMS Legs that were added since I last painted one of these. I figure I’d model it commanding: On a large base (to match the other Naga and balance better) with some scenery to make it look like it’s stopped to organize troops while maneuvering in a city. I’ve even saved an Infantry model to be a commander ‘dismounted’ and scrounged some scale jersey barriers and such.

I’ll leave it to someone much more skilled at modeling than me to add a detailed cockpit and raised hatch.

I’ve painted several Naga over the years, and tossed a couple. I have two Dark Naga that are sadly not legal under the newest rules. I recently found an old Tactical Scale Long Fang Naga (the artillery version) that looks so scrawny next to these guys. And let’s not mention the mini or two I managed to kill with wrong paint years ago.

Bases as a Commodity

My idea was to match the existing Naga I wanted a 60mm base. I spent far too long researching options and ended up purchasing several.

One thing I found is that 60mm doesn’t mean 60mm for products from many vendors. 60mm is usually the minimum and in some cases pretty reliable for the ‘inside diameter’ of the base, but modified by edge detail like beveling. Or, sometimes, it’s just off.

In searching for bases I had several goals:

I can’t complain about the base vendors focusing on 28mm and similar, of course. It does limit my choices a bit, however.

(I very slightly modified the base here by adding some sand to make it look like the Naga has moved some around it’s right foot.)

The Naga kit includes a base and ‘reworking’ this basic plastic base is, of course, an option. Dream Pod 9 also sells a small selection of resin bases including three 60mm bases. These are, it should be said, equally sized and measure 60mm in diameter. I’ve used 2 of the three resin bases: The desert base with distinctive buried stonehead and some Gear wreckage is on the Naga, while I’m using the Jungle Base for my Drake.

The Techno base was an option, but I don’t want to limit myself to DP9’s products despite their good-quality resin. (Disclaimer: I’ve done work for DP9.)

In general I like the selection of resin bases from DP9 but they may look a bit too ‘same’ if you have three models with the same base. There’s a bit more variety as you go down the line.

I considered modifying a blank base, but that just wasn’t as visually striking as I’m hoping to do.

Secret Weapon had a pretty wide range of bases with various themes. The Flight Deck base shown at left is a strong contender for my project, but I’ll have to accept that the base is pretty close to 60mm across the top unless the bevel is counted, which adds another 5mm.

Visually it’s a good option. The ‘deck’ details could pass for sci-fi road surfaces, possibly with a little rework effort. The small boxes would be relatively large crates in Heavy Gear’s scale and go well with other details like debris and barriers.

I’ve got some other good bases from Secret Weapon Miniatures for other projects. They had some good 40mm which are useful in the modern Heavy Gear game for the ‘big boy’ Gears like the Grizzly and Spitting Cobra. Shown below is something I’m considering for another project: The Naga’s aquatic cousin is the Hydra which shares the Strider’s 2-legged setup but has an enclosed hull, a turret, and is built for underwater usage. My hope is to use the base below from Secret Weapon’s “Blasted Wetlands” series and add a bit of clear water effect resin to make it look like it’s trudging through a swamp. (Admittedly it’ll only be ankle-deep if that.)

Based in Poland, Kromlech has a pretty well-known reputation for add-ons and alternate models for Warhammer 40,000 and such.

Their base selection is limited and I was surprised I didn’t find more that fit my needs. The 60mm “Rocky Outcropping” base, right, was something of a dark horse candidate.

The base is well over 65mm measured across the back of the base. Of course, with a base like this you’re probably not concerned about a few millimeters sticking out.

Only the last range really fits my need, and even then it’s a bit too dramatic. Still, one of my future projects is a tiny NuCoal force, and it’s possible I’ll add a large model like a hovertank or tank strider to that collection. These bases would also be great for some of the Caprice mounts that are built for climbing.

Kromlech specializes in 28mm so I shouldn’t be too surprised there not fitting my use.

A small German company, their Stone Floor line seemed like a good option and I was happy to find that 60mm actually measures out to 60mm. There’s some overhang but it fits the theme. Scale-wise the individual ‘bricks’ forming the surface would easily be 4-6 feet along the long edged in-scale.

I’m considering this as a contender, but the scale of the details may not work as well as I’d like.

I’ve ordered a couple times from this company. Like Kromlech, they’re based in Poland, and I will say I’ve had good luck with orders from them being received promptly

Micro Art Studio does a range of gaming products. In addition to the resin bases and such there’s some laser cut and printed items as well as pewter minis. They produce the fun Discworld miniatures inspired by the original cover art from the novels.

They do some other neat scenery bits, albeit mostly scaled for 28mm. They do several pieces intended for Infinity and a previous order included a laser-cut pre-printer “information stand” terrain piece that looks great for a sci-fi city table or perhaps a shopping mall. Another neat (and affordable) accessory from Micro Art Studio is the range of “base toppers” they sell. These are laser-cut wood pieces that can raise a mini up and give it a decorative base. One set I’ve used has a ‘deck plating’ theme with cutouts in the base to create a grating effect. Paint the base with whatever color and you’ll see it through the grating: Orange-red fire or a pure white seem popular.

Their resin bases have the common trait of a 60mm base measuring around 65mm. One interesting trick is they sell 55mm bases in addition to 60mm. Some have notches I believe are intended for the Star Wars Legion game, but others are a possibly at just over 55mm with the minimal beveled edge.

This is a 55mm Ancient miniature which measures a tiny bit more than 55.

Micro Art Studio has dozens of themes, and several are at leas potentially useful for smaller-scale games like Heavy Gear.

At left is a 60mm Tech miniature from Micro Art Studio. As with the 60mm Ancient base it’s closer to 65. This is another definite possibility, but with a twist: If I end up using this one I might coat the lowest tier (in the bottom right of the image) with basing sand to make it resemble a constructed deck of some kind adjacent to a desert region. The Tech base has three ‘tiers’ and between them would be a high step, but not impossible, for Heavy Gear scale infantry. And, of course, nothing at all to a Gear, much less a Strider!

Other Options and My Best Fit

I looked for other sources and there are many out there: Making bases can be a good cottage business for some hobbyists, I guess. It’s tough finding interesting ones that meet my requirements for scale and fit.

I’ll probably use the 55mm (actually 57) Ancient miniature from Micro Art Studio as my first choice. It’s a fun look with the scale-independent statue head and columns. Terra Nova architecture tends towards the large, and this looks like something you might see in a war-torn city in many parts of the planet. I may need to modify the base slightly, removing a few pieces of decor to give the crouched Naga enough space. If that doesn’t look feasible, I will probably look at the 60mm Ancient or 60mm Tech from Micro Art Studio with the 60mm Flight Deck as another viable option.