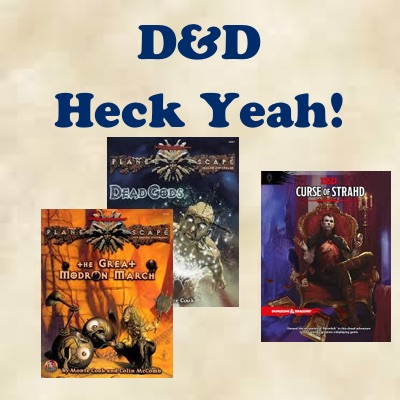 This is part 2 of 2 of a discussion of options for a Quarantine Game Night.

In the previous article I discussed DCC, an option that has “OSR” vibes: An attempt to capture the magic of early 80s gaming without the uglier parts. It has some potential, I think, for the goal of being a lightweight, fun, relaxed game to give people something to think about besides being stuck at home.

I accept that. It’s not the World’s Most Popular RPG despite certainly being related to it. So this is a brief comparison of moving to D&D for the purposes of the Quarantine Game Night proposal.

First is the Curse of Strandcampaign. This is a D&D 5e campaign that is essentially the old I6-Ravenloft adventure expanded to be much longer and more detailed. It’s relatively light horror, wandering a cursed land and (hopefully) bringing some light back to the world. One thing I like about it is the players are given a great deal of freedom: They’re presented a situation that is difficult and given room to think through it, explore, and try things. They can make positive changes and be heroes if they try.

The duology of The Great Modern March and Dead Gods is considered a high point of the 2nd edition Planescape setting: It is relatively episodic and lightweight, especially the Great Modern March. The later Dead Gods resolves a story that grows between the episodes. Like CoS, I’d expect to run it with room for the PCs to explore and do whatever they want. It’s Planescape, so it’s a tour of the worlds beyond the ‘normal’ D&D worlds.

The Curse of Strahd adventure is active to 5e, which would be my choice. If there’s interest in older editions I’d probably run the simpler I6-Ravenloft.

The Planescape adventures are ‘native’ to 2e, but I’m open to running them in 5e if there’s interest. 5e is a more modern and ‘coherent’ system, and a bit lighter weight than other editions. There’s a chapter in one of the adventures that is explicitly a ‘flashback’ to other lives in other eras, and I might keep that in 2e (if the PCs even go that way) for a single session (with easy-to-run cheat-sheet characters).

For 2e play I’d probably stick to a minimal set of books: The Player’s Handbook, Dungeon Master’s Guide, and Monster books. The Planescape books themselves. Maybe the original class books and race books for Kits, but I really don’t want to get too detailed or need too many books.

For 5e I would probably encourage use of DnD Beyond to build characters. Again, as a goal here is not to stress anyone, there’s no need to buy stuff. I think they’ve made content-loaning free or cheap, and I have the basics for PHB if not all the extras. It’s just an easy way to manage stuff.

I feel I’d run with a pretty minimal style: Assuming 5e, I’d still try to keep things ‘episodic’ and offer some loose ‘mission’ planning similar to the suggestion in the DCC entry about asking players where they want to go next. For the Planescape adventures, this might include ‘If you go here, you’ll earn a level if you complete the episode successfully’ or similar. The D&D ideas would both be more ‘character driven’ than DCC.

This and DCC are just two ideas: We can go other directions if there’s concerns.