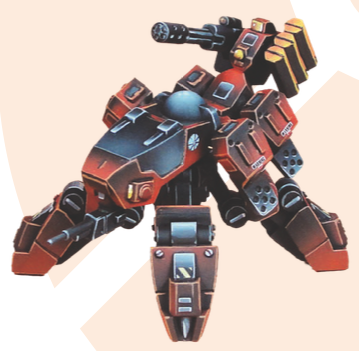 This is another in an ongoing open-ended series of posts digging into various rules I’ve encountered since I’m actually getting to play Heavy Gear Blitz! 3.1 occasionally. Please note that I’ve done work for the publisher, Dream Pod 9, although not in a rules writing/creative capacity.

Importantly, I’m still a new player to these rules and will make mistakes! Feel free to correct me, preferably on the DP9 Forums or the Heavy Gear Blitz discord.

Two traits, Jetpack:X and Jump Jets:X both provide a model with additional movement options to augment the standard rules for climbing and similar. They have some overlap, but are distinct. I think they can be a bit confusing as they overlap a bit at first glance.

The Jetpack trait is often a very obvious set of prominent rocket engines built into and around the model’s v-engine or other rear detailing. In general, think of Jetpack as hopping around allowing a unit to easily scale a moderately-sized building or similar. Jetpack can be found on a wide range of models including Gears (usually specialists such as Black Talons), Utopian Drones, Golems, and Armigers, and more. There’s even ways to get Jetpack equipped Infantry. Two of my favorite Jet Pack units are the “elite” Capricorn Mounts the Kadesh and Meggido which both add Jetpacks to the usual Caprice four-legged stable walker platform.

The Jetpack values cover a range from 4-8. This closely aligns with the size of the unit with the trait: Larger, bulkier models tend to have Jetpack: 4, while smaller, lighter units tend to have 6.

The Jump Jet trait is primarily found on models with the Hover movement type, but is not always found on those models. Notably, Hover-capable Gears and Frames may not have either trait, but they often have Jetpack instead. As a general rule, Jump Jets can be visualized as a hover tank having an ability to focus thrust to bypass bypassing smaller walls or making a small altitude change.

The Jump Jet trait is currently only found on models with the Hover movement and is not universal on those models;

The massive HHT-90 Overlord does have Jump Jets: 2 allowing it to ignore smaller walls and such. It’s one of the biggest models in the game and this adds tot he model’s mobility.

Common Jump Jets values range from 2-3. Note that Hover movement has an inherent ability to bypass 1″ for lower walls that is nearly identical to the Jump Jet trait.

This model can launch into the air, replacing a normal Move with a jetpack move.

• You must move in a straight line horizontally up to X inches.

• You may only turn the model before or after completing a jetpack move.

• You may only perform Actions before or after completing a jetpack move.

• Move over walls, or on to and off of elevations up to X inches in height without climbing.

This model can execute a powered jump over obstacles while using another movement type. You may not perform Actions in the middle of a jump.

• Jump over walls, or on to and off of elevations, up to X inches in height without climbing.

Clearly Jetpack has significantly more rules than Jump Jets! Let’s consider some things in common and different between here two:

I don’t think there’s a position where a model has both of these rules. It is important to not confuse these with the various rules with a Plus variant (ECM to ECM+) or similar. These are distinct optional movement modes.

Let’s use an Alpha Raven as an example for Jetpack movement. This model has a movement of W/G:9 and the Jetpack: 6 trait among several others not relevant for this example. As a Recon Gear it’s definitely got an incentive to ascend to a place where it can survey the battlefield to either snipe at targets or call in Fire Missions from allies.

The Raven also has the Airdrop trait which is shared with all other Black Talon models (with the exception of the Black Wind VTOL) so it may start beyond the normal starting zone with Airdrop or use Sublist-specific rules to convert this to other special placement. If it moves normally it has the ‘Walker/Hover’ movement type and a healthy 9″ range.

For Turn 1 our Raven announces it’s moving Combat Speed for a single move and using the Jetpack. It can now move in a straight line up to 6 Inches and move over walls or change elevation up to 6 inches. Effectively, it can be considered to be raised (or lowered) to 6 inches at the beginning of the move and placed wherever it would fit.

This gets it into position where it can spend it’s actions (two actions, because it’s an elite Black Talon in the newest cutting-edge technology) to shoot, hack, or forward observe the enemy. The model chooses a facing once it’s placed.

Turn 2 our Raven selects Top Speed and uses the first move to Jump Pack to an even higher location to make a hacking attempt on an enemy commander, then uses the second Move for a second Jetpack move to keep the Jump Jet movement and evade enemy fire. Of note the final jump lands on a rooftop that was agreed to be Dangerous Ground due to the amount of antennas, pipes, and other clutter.

However, since the Raven has the Hover movement type they get to bypass the normal need to make an Independent Pilot Roll (HGB 3.1, p24). In two turns it’s moved aggressively and likely earned the Elevated Firing Position bonus to any attacks it makes.

A nightmare to many Terra Novans, the CEF’s mainline Hovertank the MHT-72 has the H:8 movement type and the Jump Jets: 3 trait. There’s main battle tanks that are better armored, but the ’72 combines an array of heavy weapons with a high-speed platform that an use thrusters to overcome walls and similar.

Our MHT-72 takes a more direct approach when using its Jump Jets. It’s only slightly slower than the Raven for it’s listed movement and can’t enjoy the Walker movement mode’s advantages such as vaulting walls half the height of a model… But can ignore terrain features 1 inch or less and would normally spend half their MR to pass through area terrain taller than 1″. The Jump Jets allow this to be ignored, partially.

Jump Jets is a much simpler rule and allows the model to hop walls up to the trait’s X value. It also allows elevation changes up to the same height.

Speeding into action, on Turn 1 the MHT-72 moves at Top Speed to get into cover near an objective. This allows it to move 8″ twice. The first move is clear other than two walls. One is 1″ tall and can be ‘hopped’ with the normal Hover movement rules, while the second is 2″ tall and requires the Jump Jets be used. Near the objective it needs to cross a small Area Terrain woods that is 2″ tall, so the jets don’t help, but the Jump Jets remain in use for a short wall at the end of the wooded area terrain.

Turn 2 sees our hover tank moving more carefully at Combat Speed as it’s entered a built-up area. Moving to line up a shot it can use the Jump Jets to boost to the top of a 2″ building. One important difference is the Raven couldn’t act during it’s Jetpack moves, but the MHT-72 can shoot as normal during movement, ‘hop’ multiple walls, and so on.

In general, my mental image of these two is very different and the rules reflect this: Jetpack movement is a “super jump” and requires the model focus. It’s intended to allow dramatic repositioning to get a model in place. it has strict limitations and replaces the model’s normal movement. Contrast to Jump Jets which enhance existing movement.

Note that both of should count for an important rule:

Models cannot be placed in locations they would not normally be able to move to. For example, a Visigoth main battle tank cannot be deployed on top of a building’s roof.

Even if you don’t find these rules useful in regular play, consider them to make ‘turn zero’ more productive by allowing them to get into position to make the best use of subsequent turns. Don’t be That Guy, but if you want your Black Talons to start on a rooftop or a scout Hovercar to have visibility for that first turn, go for it!

I haven’t had a chance to play with these rules much as of yet but hope to do so soon, especially if I get time to paint up some Black Talons.