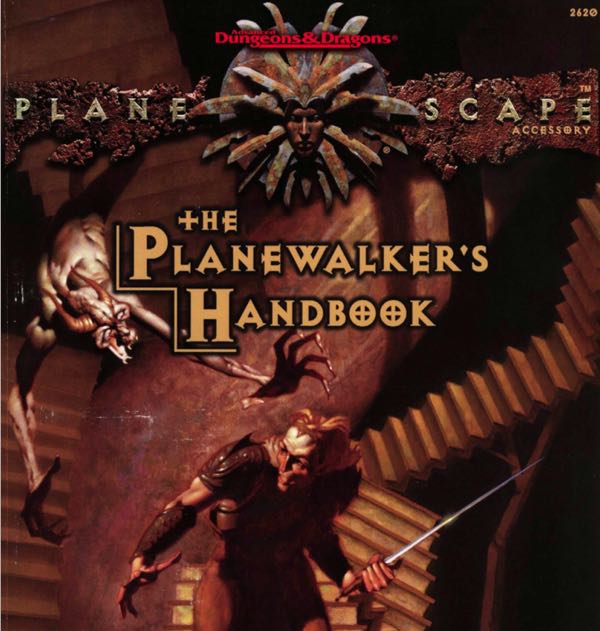 Planescape is a favorite of mine. One of the last 2nd edition settings, it took content from the Manual of the Planes and gave it a great new life. The plan is to write a few posts about how I’d revive this setting for fifth edition, both as a player and if I was doing so of Wizards of the Coast.

The Manual of the Planes is generally considered a major book from 1st edition AD&D. It took some ideas sketched out in the core books for worlds beyond the basic world and created dozens of worlds for DMs and players to explore. These were described in the early version of “The Great Wheel” as a structure for reality beyond the norm.

It’s also written in a somewhat weird style. It’s a ‘travelogue’ with a firm page limit for each of the many planes. (Note: “Plane” is a term used for much of D&D. It’s an alternate dimension, or perhaps a different aspect of this dimensions. They’re almost like something from a video game, with each plane being described as a collection of reasons most player characters shouldn’t go there unless, as befits 1e, they’re Bad Enough Dudes. Some of the planes are hostile to life in many ways: The Inner Planes are elemental themed, and simple survival is a challenge there. Or the lower planes, modeled after myriad hells taken from a dozen mythologies. (The upper planes could have the opposite problem, being boring to many.)

So, Planescape: Planescape took this material and refined it. More importantly, it *made it useful*. It created situations in which even low-level player characters could travel to other planes.

The Great Wheel has seen lot of changes, 3rd and 4th edition D&D took different approaches. Planecape’s 2nd edition run ended with the *Faction War* adventure, which introduced some unwelcome changes to many to the setting, destroying a lot of aspects people liked. A key question is if this should be use or quietly ignored.

In general, I’m leaning to ignoring it. The Forgotten Realms sticks to ever moving forward, but that doesn’t mean the other settings need to do so. So I’d consider the primary reference the 2nd edition box sets and such.

Next time I’ll have to look at some specific ideas for ways to work with the 5e rules.